Where you come for your share of Puppy fun!

So, my very own puppy is going to have to wait for a little longer. Why? I'll tell you why and I couldn't be more excited about the reason.

Remember when I posted that KENO became PWAP's very first ever breeder after having been an organized club for ten years? Well, his first litter was born on May 1st and the Momma dog is a female black lab named Disney (cute name huh?). Keno's raiser was battling back and forth about whether or not she would raise one of Keno's puppies because she goes to school and she's never had a puppy younger than 6 months because of this. I extended my services and said that I would be more than willing to co-raise with or fully raise one of these puppies for her until he/she was old enough to be with her full time. She finally made the decision about a week ago and we have been assigned a puppy from Keno and Disney's litter!

I'm excited about this for two reasons. First, Keno was an awesome puppy! Seriously, he was such a mellow yellow fellow. And super cute. Second, Disney is an Atrus puppy. For those of you who don't know my second puppy, Rocco, is also an Atrus puppy. Which means I'll have Rocco's half niece for a little while.

The little pup will be ready to come to Fresno at the end of June and I'll still be in Aberdeen until the beginning of August. So, Keno's raiser will have the little one for a full month before I take over and then I'll have the pup until early November. I'm very excited about being able to help her raise one of Keno's babies.

Alright, five reasons. How cool is the letter "Q"? I've got one of the interesting letters now (and because I know one of the raisers of the parents I've been subtly suggesting names *wink*).

Maybe I'm just all around excited.

After Miss "Q" goes back to Keno's raiser in November, I'm not too sure what I'll be doing. I'm hoping that Dulcie becomes a breeder and if she does then I will wait until her first litter is born to get my next one. If she is spayed, then I will put in for a different puppy. I figure since Hilly gets her female black lab in Miss "Q" then my next one will be another female golden. (For those of you who don't know Hilly doesn't really like any of the puppies in training unless they are black labs. Well, she actually plays with the black labs. I know, I know. It's weird.) But who knows!? I sure don't, but I'm very excited to see where this next year takes me.

Even though I won't be there to pick up Miss "Q" or see her when she's a very little baby, I'm SO excited to see pictures.
Posted by Raiser Erin at 10:05 AM No comments:

Yesterday marked 2 weeks until my honours level dissertation is due. After that all I have left is final exams at the end of May and then my undergraduate University career will come to an end on July 10, 2014 when I graduate. It always shocks me how quickly the past 4 years have gone by. It seemed like forever away when I arrived in Aberdeen in September 2010. But forever has come...maybe a little too soon. I had no idea what I wanted to do with my life when I started and now I have a clear path erm, idea rather, of what I want to do. What is totally out of the blue though is that I'm heading back to my home town. Gosh, I never thought that I would ever want to go back. But I do. And while I'm not looking forward to saying good-bye to Aberdeen I am looking forward to going back for a gap year while I apply for graduate schools (and try to convince the American schools that I'm NOT an international student).

Which brings me to my next journey.

I turned in my puppy application for August 2014. I can't believe that I'm actually going to start again. I know I've done bits and pieces here and there but to actually have my own puppy again is terribly exciting. I've loved my summer puppies (Hilly and Dulcie) and my Scottish Lads (Frankie, Quinn, and Marco) but I'm very excited to have a full time puppy again.

I'm excited to get back to GDB. There have been so many changes to the puppy raising scheme since I was a full time raiser and I'm very excited to learn all the new tools GDB has introduced.

I'm looking forward to my next venture, but soaking up all the time I have left here in the...well the rain. But, I love the city of Aberdeen.
Posted by Raiser Erin at 5:03 AM No comments:

I've realised something in the past months. All of my puppies with the exception of Marco share birthday months. Freya and Quinn even have the same birthday! I suppose it makes things easier for me to remember. Haha!

So, Happy Birthday to my March babies!

My fur-ever girl HILLY turned four on the 23rd of March. I have to say, I'm so ready to stop having to spend birthdays away from my Sweet Bean. I'm ready to wake up to her pushing me off the bed everyday. I'm ready for early morning walks everyday. I'm ready be able to call her really and truly mine. I've always held that these dogs go where they are needed most. Hilly could have been a Guide if she wanted to, but I think she knew that I needed her more. What can I say, she's one of two dogs I have formed such a strong bond with in such a short time. She is one of my "heart" dogs. I said my last good-bye to her in January and I'm ready to be reunited for good in August. Four more months Bean!
And Sweet Dulcie Doodle Doo turned one on the 14th of March! She got to spend her birthday with Mary but then went back into season so is finishing up another two weeks of "spa treatment" just now. One year marks a time when recall is just around the corner. Dulcie has been given the title of PPP (practically perfect puppy) by the great and powerful Jim. An exalted title to receive. She's an absolutely stellar puppy and I know that she will do great things! We're hoping that she become a breeder because she's just such an awesome puppy, but if not she will be one amazing Guide. Happy Birthday Doodle Bug! I'll see you at your graduation because I'll unfortunately not be home in time for your recall. Keep making Mary and me proud.

Posted by Raiser Erin at 7:24 AM No comments: 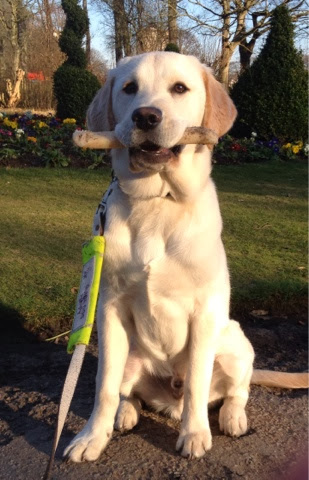 [photo description: Marco at the park in front of some flowers in bloom holding a toy]
Posted by Raiser Erin at 9:37 AM No comments:

Yes, I Talk to my Dog

I get looks a the time out on the street and in buildings, classrooms, the office, etc. Why? Because I talk to my puppy. Not just "Good boy/girl!" when they've done something good. I actually hold conversations with my puppy. Obviously, their end of the conversation is all imaginary but I do say my part of the conversation out loud. Especially when I'm walking with them. It gets pretty boring, so having a conversation, even with a puppy, takes away some of the boredom.

So, this was the conversation that Marco and I had yesterday. Keep in mind, Aberdeen gets very blustery in the winter months.

Me: Marco, leave!
Marco: Yes Erin, those are leaves! Aren't the so cool when the blow in the wind like that?
Me: No Marco. I mean that you need to leave them alone and let them go about their business ok?
Marco: Oh, ok...But Erin?
Me: Yes Marco?
Marco: I REALLY don't want to.

I'm hoping that other raisers out there understand because otherwise I'd feel crazy.
Posted by Raiser Erin at 2:32 AM No comments:

I've only been back in Aberdeen for three and a half weeks and I'm already going through puppy withdrawals. I'm so ready to have a puppy of my own again. It feels like it's been so long! Freya is still the only puppy who I have raised from start to finish and I kind of really want another one. Haha! It's an addiction.

Luckily, Marco Polo is coming for a short visit tomorrow evening. I think he's still a tad too young to handle a full week during term time, so we're easing him into the University Student life slowly. He'll be going to work with me Thursday and Friday and then hopefully he'll be ready for University by March.
Posted by Raiser Erin at 11:00 AM No comments:

Raiser Erin
Hi, I'm Erin and I have a problem. I'm addicted to Guide Dog Puppy Raising. I started with GDB over 3 years ago. My first puppy Freya graduted as a working Guide in May 2010 and my second puppy Rocco graduated as a working Guide in August 2011. My third puppy, Hilly, was career changed in August 2011 and is now living life as my spoiled pet. I'm from California, but now I live in Aberdeen, Scotland as I go to University. Follow my puppies' journies as a Guides, Career Change, and puppy sitees or follow my journey of going to school in a different country.